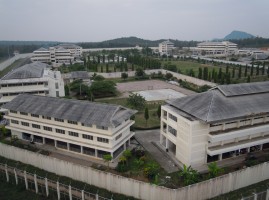 is an effective frequency jammer that operates on the cell phone band such as CDMA, GSM, 3G, LTE and so on.

is effective in interrupting wide band frequency at 20MHz~2.5GHz, up to 6GHz. Optional operation is available in selecting and disrupting specific frequency section.

is available to serve to open a selectively chosen communication frequency, walkie-talkie or wireless microphone or Wi-Fi, in particular.